i would have to say that our new mexico shows have been the best in the
history of spam scam. The audiences rule. they want to see the show. it's
not a hassle for them. i think they're used to seeing shows done by people
who love doing theater and aren't trying to get a tv show.

or i'm idealizing them and we're just a really great shoe and they've never
seen anything like it.

i doubt that, but man, they're great.

i totally beat the opening last night. and i just stopped and told the
truth. "i screwed this up so badly i can't get out of it and i've been doing
this show for almost three years. i am an idiot" and we just continued on.

it's been great fun though i am missing the bride.

plus, the theater company, tricklock, have actually organized this. we get
picked up on time. they stick to the schedule, they're happy that we're
here. it's really, really. cool.

on that front, there's been a weird turn where the theater there is worried
about us upsetting the nigerian embassy, so we've changed the show to "The
Email Spam Scam Scam". You know malaysia has lots of censorship stuff going
on and there may be some difficulties with some of the muslim asides i make
in the script. it has to be approved by the government there.

it's their theater and their money and they know what's best and what works
best. the show is not about revolution... i mean, it's subversive and all
that stuff, but... so far there has been nothing i consider a compromise.

i think the thornbirds played here a while ago. or was that arizona? i don't
remember.

anyway. got in at midnight. they picked me up. took me right over to the
venue. everything had been set up. we go the video controller hooked up. i
stumbled through the end. done.

you know. after "other experiences" with the show, i just expect
incompetence. it's so nice that these guys, the tricklock theater company,
are ON IT.

Man. Everything is perfect. I bet even Billy will be happy!

speaking of pro: http://gardnerandwife.com/06_spamscam.asp It looks like
we're actually going to Malaysia this April. Wow.

The theater here is big and nice and comfy and everything works. Should be
fun.

It's cold. Not crazy cold and not cold like you're in a foreign country so
you won't ever be warm again cold, but it's cold. Like it's winter in New
Mexico. That sort of cold.

I'm lightheaded from the lack of oxygen. there's an altitude situation.

Yes, it's true. Congress has decided that Mister Snickers is worthy of his
own stamp.

These are real. You can actually mail stuff. Buy enough to send that check
off to Nigeria.

i'm hopeful that this will turn in to another show. 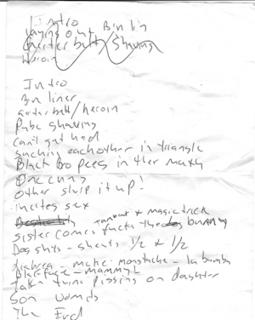 This is the "setlist" we used for the performance of the Aristocrats at the Underbelly.

I referred to the woman as Joyce, but her name is actually Janice.

I think they're going to use the video as an easter egg on the Aristocrats DVD.

Oh my.  ¶ 4:11 PM 0 comments
logging what goes on before, during and after producing the two person show "Dean Cameron's Nigerian Spam Scam Scam" at the Edinburgh Fringe Festival and beyond.